We live in Cavango, a small, rural village of about 500 people that was a mission village before 1976, especially housing and treating people with Leprosy. In 1976, all 250 Lepers were slaughtered during the civil war and the villagers scattered, many walking with a group of more than 5000 people on a pilgrimage to a refugee camp in Zambia (a nine month trek through the wilderness) until the war ended in 2002. The people of Cavango and those in the surrounding villages have since begun to repopulate the area and continue to live simply, in simple stick and mud homes with grass roofs, without electricity and running water, via subsistence living, farming by hand and raising animals for food. Many in the village have never been to the city as transportation is mainly by foot (about a week’s walk to the closest city).

Collecting wood for evening fire. Our village is in background.

The church building in Cavango

A small church remains in the village, a remnant of the former mission, and has about 50-75 adults and about an equal number of children. The pastor, Jeremias, is a Jesus-loving man in spite of a life filled with tragedy (see story – https://kubackisinangola.com/2013/11/06/danny-craig-jeremiah-jesus). He has become a dear friend and brother and we will enjoy building further relationships here over the next two years, seeking to serve with medicine the people of this region of Angola, while sharing and demonstrating our Father’s love for them.   The people live difficult lives, vulnerable (especially the children) to malnutrition, malaria, diarrheal and respiratory diseases, as well as Tuberculosis and Leprosy. Every family has lost several children to disease, malaria killing the most children (in this region 1/3 children die before the age of 5). 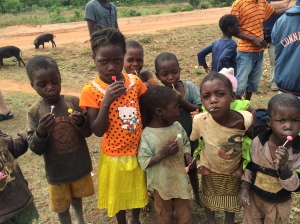 The beautiful and the vulnerable

This little 2y/o girl survived 48hr of persistent seizures and 4 days of coma secondary to Malaria. The Wind…

There are 50+ similar villages of 500-1000 people in the region with no access to a physician (they also lack transportation to the cities), who might use Cavango as a health care facility. Transportation is almost exclusively by foot, as there are perhaps a bicycle or two in each village and some larger villages might have motorbike owners.

All of the villages we serve look like this one…

In 2006, Samaritan’s Purse financed the construction of a small 12 bed hospital and outpatient clinic building in Cavango (we’ve expanded it to 40 beds). There are four minimally trained nurses who have seen a few patients/week for the past several years.  In 2014, Vineyard Church of Delaware County (Tim and Betsy’s home church in Ohio) purchased a vehicle to help transport those ill and injured to the clinic.  Tim is working at the clinic the first two weeks of each month, having seen the patient volume increase greatly over their four years of work. We are seeing about 20-50 new patients/day as of November, 2017.  The location appears to fit what God has asked of us in serving with medicine and communicating and modeling God’s love to those who have no access to the same.

MAF and AGA have combined to finance the construction of a dirt airstrip in Cavango, which will hopefully be completed in 2018 and will greatly facilitate medical transport to the city for those needing urgent surgery, as well as make it more convenient for Tim’s monthly travel ministry with MAF.  We are considering building a hangar, more hospital buildings and housing for a pilot’s family and stationing a small plane at Cavango, as well.

A leprosy patient with our pastor, Danny Meyer, from Ohio

This site uses Akismet to reduce spam. Learn how your comment data is processed.